I Almost Don't Have a Cold: Just in Time for Memorial Day Weekend

Tomorrow, for many Americans, is the practical start of Memorial Day weekend. If we've got the seniority, we're likely to take the afternoon off: and get a head start on the first marathon trip of the summer.

Or maybe not. That's the way it was, a few decades back: but times change.

I'm staying put: although I do plan to get out of the house at least once over the weekend.

If all goes well, our gas meter will get moved tomorrow. A dumpster arrived today. What that's for, I don't know: but it's probably connected with the gas meter move. I could ask my wife.

My son and I talked about water and oxygen on (and in) Jupiter's moon, Europa: and then read Garfield.

Me, #3 daughter, and my wife went to Soo Bahk Do class tonight. I plan to get involved in that - but have several years' worth of enforced inactivity to undo first. Or maybe I'm just procrastinating.

I spent quite a bit of today, re-organizing my Easy Griller website. The navigation is (or should be) a trifle less difficult now. At the rate I'm going, I'll have the last part of that makeover done in 24 hours - on time for my 'Memorial Day weekend' deadline. Next step: reviewing & rewriting - and adding photos and other graphics as needed.

That's it for today: Goodnight and may God bless.
Posted by Brian H. Gill at 10:52 PM No comments:

Having a Cold isn't Fun

The family here has had a cold for - it feels like forever, but my wife tells me it's no more than a couple weeks. She's usually right about that sort of thing.

I've been coughing and sneezing a bit less this week: which is fine by me.

Other than that, a few things have changed.

I got the hummingbird feeder out - and had a few hummers drink it dry after the first day. So far, after refilling it: I've seen none. Wait a minute: One just zipped in - and out again.

My wife and #3 daughter got the window air conditioner set up - another sign that summer is here. Or coming.

We made some calls with the gas utility: apparently they're still recovering from that alternatively-competent supervisor. We'd been told that the meter would be moved in about two weeks. When a month had passed, I decided to see what happened.

We're expecting a crew to come out and reposition the meter this Friday. There's a white line marked in the grass, with a flag and everything. I hope they show up. The state-mandated markings they made, earlier this year, are disappearing as the grass grows.

#1 daughter decided she'd be better off, relaxing at her own place. She's got the same bug we do - and I think she made the right decision. There's a lot to be said for being where you can utterly relax. We got a call from her, a few minutes ago. She wanted advice from "Dr. Mom."

Which brings me up to date, more or less.
Posted by Brian H. Gill at 6:58 PM No comments:

For Once, I Feel Great About Monday

I had some sort of bug - or maybe problems with allergies - or something - last week. Whatever was going on, it seems to be pretty much over. For which I'm duly grateful.

To celebrate, sort of, I 'bicycled' for three minutes short of an hour this morning, using the family's Wii Fit2 software. That was fun - and reasonably good exercise.

My son-in-law called: His company's documentary is moving along, and we've got the script to read and nit-pick. That would be #3 daughter and me. We've both got writing experience - and at this stage it's a good idea to get feedback and (maybe) identify rough spots that need smoothing.

He's also put in a big weekend in the yard. The chicken coop is up - apart from the final roof. #2 daughter picked her husband up with the tractor's scoop, and lifted him about a dozen feet up, to get some trees trimmed. I wish I'd seen that.

Here in Sauk Centre, we've now finished replacing most of the plumbing fixtures. That's a long-overdue project I'm glad to see done. #1 daughter tells me that colors of the old bathtub with its tile, and the toilet don't work with the cheery new green paint on the walls. She's probably right - she's now graduated from the commercial art program at Alex Tech.

Which reminds me: #1 daughter graduated Friday.

I'll get back to that, another time. Right now, there's nearly a week's worth of backlog to take care of.
Posted by Brian H. Gill at 2:36 PM No comments:

Mother's Day is tomorrow and the family got together at one of my in-laws' place, as we do around this time each year. There are other get-together times, too, for my wife's immediate family: linked to Christmas and Easter. Right - and a family reunion that's coming up. That's another - and larger - set of kinfolk. We rent a park in Osakis, down the road, for that event.

#2 daughter and my son-in-law are settling into their new home. He's from Louisiana: never dreamed of moving to North Dakota (few people do); and has fallen in love with the family place, up in the Red River Valley of the north.

And bought a little garden tractor. 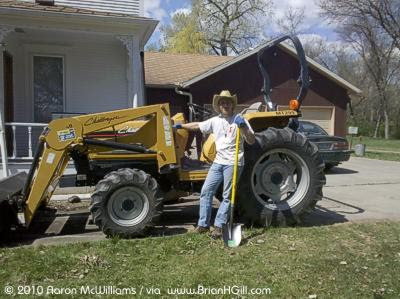 Remember, they're living in the Red River Valley of the North. As I recall, that's a smallish utility tractor: big enough for yard and garden chores, but not what you'd prefer for working the fields. 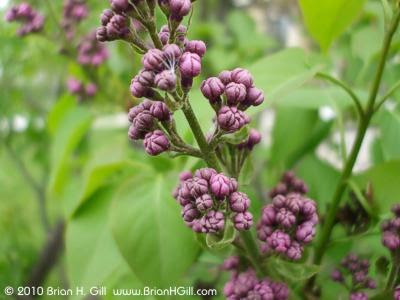 Despite a little snow yesterday, and today, and a freeze warning in tomorrow morning's forecast, I'm pretty sure summer is coming. That 'freeze warning' applies to sensitive plants - I'm hoping the lilacs and cherry tree will be okay.

While I'm writing about weather: I found this on the Wunderground site:

"The totals below are separated into snow... and ice and sleet
categories... then by amount... and are not necessarily the
final amount for each location.

Minnesota weather/climate is not boring. 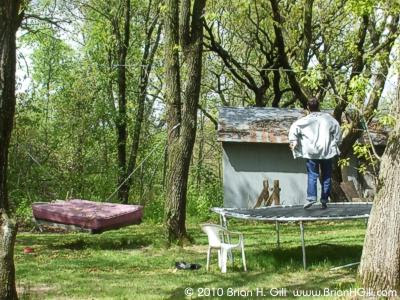 My brother-in-law does a good job of setting up the back yard for the kids. 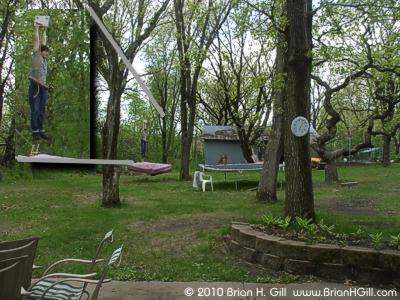 Take that zipline, for example: it ran a couple dozen yards, at least, from a platform in a tree off to the left, to somewhere off the right side of that photo. Some of the kids had a great time with it. My son tried it again, later, got just off the platform - and the thing stopped. He hung on for a while before dropping - quite a ways.

Got the wind knocked out of him, but he'll be okay. His biggest regret is that he didn't have his camera set, so that he could have gotten a video of it.

Quite a lot has happened since I was his age: a camera I can wrap my hand around takes video that's roughly as good as news broadcast video was then - and is inexpensive enough for a 14-year-old to buy with money he's earned. 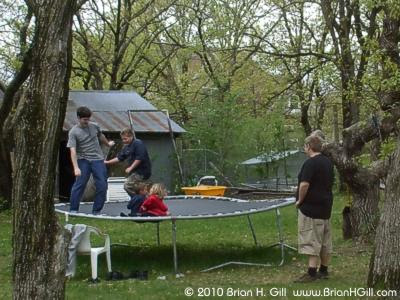 Miscellaneous young family members on the trampoline. It broke in three places, a little later. May 8, 2010.

This photo was taken before the zipline incident. Even if I didn't remember that, I'd know, since my son's arms don't have the alluvial deposits they picked up later. He's having fun with some of his cousins. 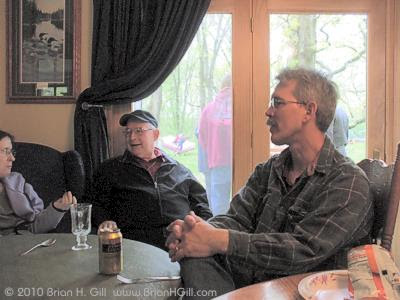 Three generations. The older two inside, talking: the latest set outside. May 8, 2010.

Me? I stayed inside with the rest of the old guard. This is the first of these get-togethers I've gotten to in - years - and it's good to be back. 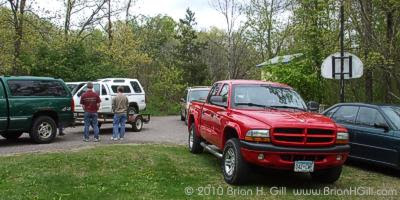 The Volkswagen bug is behind the green truck, and there's a minivan parked up the road. May 8, 2010.

That's a sort of 'as the sun slowly sinks' photo: I thought it'd be fun to show (most of) the vehicles we used to get there.

I see that the sun actually is sinking in the west. And I've got more tasks to get done.
Posted by Brian H. Gill at 8:31 PM 2 comments: