I Got What I Asked For

"It could be worse," as the old Minnesota saying goes.

A few days ago I expressed the wish that my body make up its mind: either be sick, or not feel slightly 'off.'

I got what I asked for. The next day I had a sincere cough, a wholeheartedly stuffed nose, headache from coughing so much: the whole package.

This morning, my wife told me I wasn't going to church. I had no problem with the idea. I've been spending the day being quite: aside from the semi-regular cough. 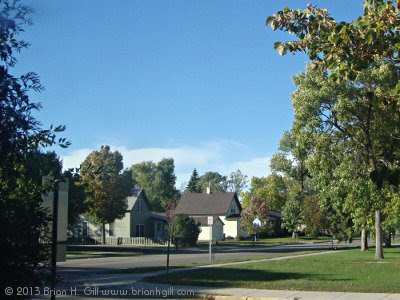 Calculus and the Mind's Eye

My wife and #3 daughter are teaching/tutoring kids from another home schooling family this afternoon. One of the subjects is arithmetic, a useful skill but not one of my favorite academic disciplines.

Arithmetic isn't quite the same as mathematics, and that's almost another topic. My wife is the math whiz of the family: no surprise, since she's also the one with a degree in computer science. I'm more like my father: much to the frustration of school teachers and administrators who looked at my aptitude test scores, which showed considerable mathematical ability; and my report cards, which definitely didn't.

I think part of the explanation is how our brains 'do the math.'

My father told me about a test he took in calculus class. One of the test's questions described two cylinders which intersected. Students were supposed to pick the intersection's volume from a list of numbers, showing the calculations they used to arrive at that number.

While everyone else started using calculus to determine how much volume the cylinders shared, my father imagined what the cylinders looked like, looked at the cubage where they went through each other, and checked off that number: which was one of the possible values shown on the test.

Then he set about writing down what he hoped was the set of equations that would give that answer.

When the test came back, he'd gotten that problem wrong.

He was the only one in the class to get the right result for the intersection's volume: but his written math wasn't even close to being correct.

I'm the same way. My mind's eye has excellent vision, but I never passed calculus class.
Posted by Brian H. Gill at 4:45 PM No comments:

Good news. The local pharmacy called, late yesterday afternoon. Authorization for my methylphenidate came in the mail. I picked it up in the evening, and started taking it again this morning.

This is one of those medications where the effect is obvious: to me, anyway. I'm looking forward to having much less trouble 'fighting the machinery' when I think. :)

I used the last of my methylphenidate prescription earlier this week. I had verbal assurance from the local pharmacy a week ago that a fax requesting authorization for the refill had been sent. There's no mail delivery on Labor Day, so I had hoped that perhaps the 'it's okay' piece of paper might arrive Tuesday.

Tuesday afternoon came and went, so I hoped that it might be in Wednesday's mail.

I understand the social and legal circumstances behind this situation. Methylphenidate can be misused, so although I need it to function adequately - a piece of paper has to be sent from St. Cloud, Minnesota, to Sauk Centre each time I need to renew this prescription.

After learning that the local pharmacy's new automated prescription processing system deletes this particular prescription after I enter it in the 'correct' way, I have spoken to one of the folks there when renewing the prescription. It's a bit more work, but at least this way there's a better chance that the request will get processed.

Oh, well: maybe the authorization will arrive in today's mail. Or tomorrow's. Then again, maybe not.

My son passed the driving test, and has his first driver's license. Or will, once all the paperwork is done.

He drove me to Alexandria this morning, where he took the test. We had a good talk going and returning: and reason for celebration on the way back. The 'celebration' consisted of his driving to the DMV (Department of Motor Vehicles) office on Sauk Centre's north side, filling out a form, and paying for his license.

This is a milestone in his life: and mine. Now all the kids have their licenses.
Posted by Brian H. Gill at 6:28 PM No comments:


Me, at a computer