'Aside From That, Not Bad'

It's been one of those gray, overcast, damp, dripping days on October. Then, a little before noon, I realized that my glasses needed cleaning.

Then I broke them. I wouldn't have expected metal frames to make the sharp snapping sound these did when the became two monocles. 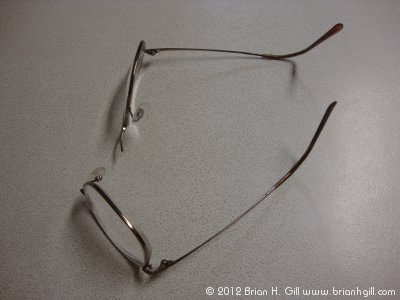 The good news is that I can still get a replacement frame; and Eyes on Main, downtown, is lending me a substitute frame that almost fits these lenses.
Posted by Brian H. Gill at 10:38 PM No comments:

I got my annual flu shot yesterday. It's a routine I started a few years ago.

The year I missed the influenza inoculation was the same year I experienced a modestly spectacular encounter with the flu. That may have been a coincidence, but then again maybe it wasn't.

I need to find out if I have been inoculated against shingles. I think I took care of that. If not, it should be done.

As usual, folks at the pharmacy where I got the shot were very earnest about getting full health insurance information from me. I think it's a cultural thing. I was born during the Truman administration, but my attitude is rooted in an older tradition.

By the time the fellow who does the injection came, and asked - again - about insurance, I'd become a bit 'earnest' myself. I told him:


"The insurance won't pay it. Nobody else will pay it. Somebody's got to pay it: so I'll pay it."

He told me that he remembered me from last year. I believe it. ;)

This time, the drive up to North Dakota was planned. The trip was mostly a family get-together, with intervals of business. I saw Spiral Light Candle Corporation's new online store, complete with better navigation and a short demo video; talked about what the company will be doing over the next several months; and enjoyed being with #2 daughter and son-in-law.

#1 daughter was there, too, so we had a 'complete set' this time.

Between 'talking shop' and watching a movie, I didn't get much sleep over the weekend. I figure that I'll be caught up in a few days.