Signs of Spring, or Summer, or Something

A day or so ago I saw two birds, about sparrow-size, at the bird bath. I hadn't filled it, but between snow and rain it was full. I'm not sure what sort they were - the tops of their heads were reddish - and that's about as much as I know at this point.

I spent a few minutes on the front porch/stoop/whatever yesterday afternoon, enjoying the bench, the sun, and fresh air.

This morning, noticing that my feet were over-warm in the winter slippers I've been wearing, I switched to flip-flops.

It's definitely spring. Or summer. Or something.

Whatever this time of year should be called: It's warmer, and I like it.
Posted by Brian H. Gill at 10:17 AM 2 comments:

'It was Only a Small Fire'

First, the good news: Nobody got hurt.

My son-in-law had gone into the garage to get some chicken feed out of their Buick. Since the car hadn't been driven in a while, and he & #2 daughter were planning to use it later in the evening, he tried starting the engine.

He heard a "POP," and saw smoke coming out from under the hood. It's a wood frame garage, attached to their house - with a propane tank on the other side of one of the walls.

My son-in-law called #2 daughter to come and help, hooked a logging chain to that burning car, and pulled it out of the garage- - - 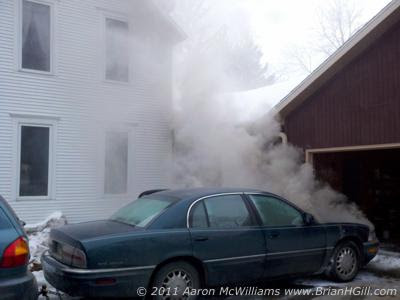 - - - before it got to this point. Then he told #2 daughter to call the fire department. 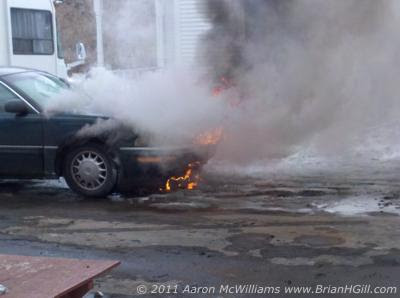 It only took them about five minutes to get out there - which is pretty good response, considering they're on the other side of an Interstate from the town. I'm told the fire fighters commended the young couple on quick thinking and cool heads. When they got the call, for a garage fire, they figured there wouldn't be much left of the house by the time they were through.

#2 daughter and son-in-law had a fire extinguisher out there - but they decided the priority was getting the vehicle away from flammable materials. I haven't heard of a logging chain and towing hookups being standard home emergency equipment - but it sure came in handy this evening.

I spoke with my son-in-law an hour or so ago. He figures the most likely explanation for the fire is a critter getting under the car's hood and chewing on wires. When power was applied, a short circuit could have ignited plastic, melting more insulation away.

I'm just glad he and #2 daughter are okay.

Late last month, #3 daughter got promoted to 1st gup in Soo Bahk Do. Which is a pretty big deal - it's the last step before black belt. Except it's more of a midnight blue belt. Soo Bahk Do is a sort of karate, except it's from Korea. Which is why my wife and #3 daughter are learning Korean.

Also, in my wife's case, Latin - and that's another topic. She's teaching for another home-schooling family we know. So, for that matter, is #3 daughter.

Me? I spend most of my time writing posts, and nosing around the Internet to find something to post about.
Posted by Brian H. Gill at 9:28 PM 3 comments: