Back to 'Adjusted Normal'

I took my methylphenidate prescription this morning, for the first time since - Saturday, I think.

I'd miscounted, which resulted in my getting the request for another prescription into the local pharmacy's system last week. I confirmed that the fax was sent to the St. Cloud office, called there to make sure it had been received, with an oral assurance that the authorization would be in the next day's mail.

That was Friday. If mail service was unusually prompt, the 'okay' might be here Saturday. It wasn't, so I checked Monday afternoon.

The local folks hadn't picked up their mail yet, but called back before 5:00 to let me know the prescription would be ready. They're in an awkward position: the mailbox serving them is on the other side of Ash Street, about a hundred yards from the nearest door. That's a long, chilly walk in winter.

It may be a few more days before my neural chemistry is back to 'adjusted normal,' but there's a perceptible difference already, at about 10:20 a.m. I'd love to be without need of this and the other pharmaceuticals, but that's not the way things are.

I spent all day Sunday and Monday feeling as if it was nearly midnight: after a day if intense mental efforts. I was 'functional,' in the sense that routine tasks like walking, talking, and brushing my teeth were possible: but I was also profoundly glad that I didn't need to be particularly bright just then.

Writing this post went smoothly, so now it's time to start work on — what was I working on before???? ☺

Getting the Furnace Fixed

Our furnace is getting repaired. That's very good news, since it's about 19 below zero, Fahrenheit, outside. The wind chill is about minus 30. That's cold, even for central Minnesota in January.

We noticed that the furnace was getting temperamental on Friday. The house was alternately warmer and cooler than expected. Sure enough, a particular sequence of indicator lights was flashing on the furnace and there was a pool of water around it.

Today was the earliest a technician could come: we're probably not the only folks with balky systems. Happily, we've got procedures for dealing with this sort of thing. Even so, a circuit breaker tripped - I think that was Friday night. That was an easy fix, and now #3 daughter knows how to check and re-set the circuit breaker panel.

The obvious problem with the furnace is gunk that's collected in one of the pipes involved in the humidifying machinery. That's easy to deal with, I gather, but the tech is still here.

It's still cold outside. My wife told me to stay put today, instead of going to church. I think that was a good idea, considering the shape my left shin is in.

On a happier note, I've been enjoying a Christmas present. Several, actually, but the one I had in mind was a book on one of my favorite topics: useless information. 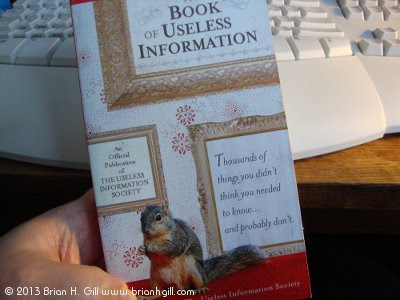 A little more seriously, I've been writing posts for A Catholic Citizen in America and Apathetic Lemming of the North, and making progress on a few of my old 'back burner' projects. 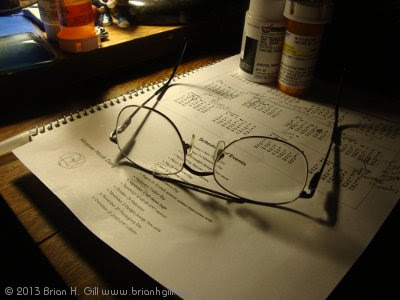 It's after supper as I write this. I've got a little more 'break time' left, and then it's back to work.

A few hours after getting an automated call from the Sauk Centre Public Schools, I learned that all Minnesota public schools were closing. The Governor said they should. I'm glad that someone showed good sense. It's going to be - brisk.

I've seen a doctor about my left shin: again. The good news is that the two new open spots aren't infected. The bad news is that even when these heal over, I can expect more of the same. It's an incentive to keep my diabetes under control, and lose weight. Lots of incentive.

It's also frustrating: but I've had lots of practice dealing with "frustrating." I think having substandard hip joints helped me learn, from infancy up, to deal with limitations: not quietly, or calmly; but to deal with them.

On a happier note, there was a big family get-together today over at my father-in-law's place. A really big one. I stayed here, partly because I'm just about the exact opposite of a 'party person,' partly because I'm having more than the currently normal trouble with my legs, and partly because I had a post to get ready for tomorrow.