Wintry Weather and a Balky Furnace

We woke up this morning - always a good way to start a day. It was a little above freezing outside, and significantly warmer inside.

On the down side, the furnace had quit during the night.

It's about 12:20 now, someone's been here to see what the furnace trouble was: and fixed our pilot light. The house is warming up to winter-normal now.

The situation could have been a lot worse. Quite a few folks in this part of the state lost power yesterday.

And, I see, St. Cloud set a new record for rainfall:

"...If you have a tennis match scheduled at Gold's Gym in Sartell today (Wednesday), you're going to have to reschedule. The manager says their inflatable dome has a 30-40 foot tear in it, due to the strong winds last night, causing it to deflate. He says they're hoping to get it fixed and back up by the end of the day.

"We also set a rainfall record for the second day in a row. We officially had 1.44 inches at the St. Cloud Regional Airport. Breaking the old record of 1.33 set in 1941. We've now collected over 2 1/2 inches of rain since Sunday. And, after being dry for most of the month, we're actually .62" above normal now for October....

There was a powdering of snow on the ground in the morning, but it doesn't look like we'll get the one or two inches forecast. Can't say I'd be disappointed to miss that. For the sake of trick-or-treaters, if nothing else.

I took some photos yesterday afternoon. The folks across the street from us lost a branch that's maybe three or four inches in diameter. 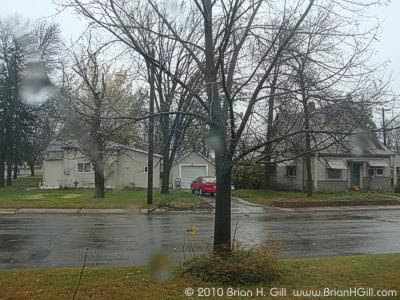 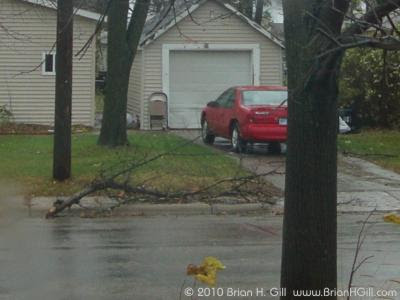 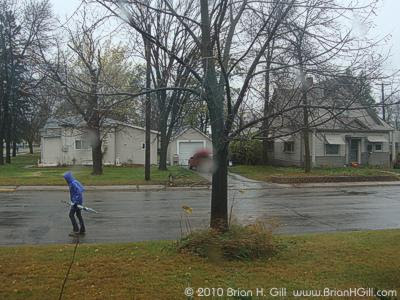 When this Monday dawned, the house had a working bathroom: two, if you count a lavatory. Then, briefly, we had two: or three.

We're doing fine, really: No porta potties, and no plans to excavate for an outhouse: which is probably illegal inside Sauk Centre. I'd have to check zoning and other regulations.

The good news is that it isn't the same one that's out of commission at the moment. We're getting some overdue maintenance/repair word done upstairs.

On an unrelated topic, my wife's got a cold now. They say that it's a good idea for couples to do things together - but this probably isn't what that anonymous "they" had in mind. She says that I seem to be on the mend - which may be true. I don't feel sick, or tired, or much of anything else: and thinking isn't as easy to do as I'd like.

Oh well, as we say in Minnesota: It could be worse.

Thanks to a reminder from #3 daughter and my son, I grilled burgers for supper tonight. Work in the house hasn't directly affected the outdoor grill, but we're in the habit of having fries (which we bake) with the burgers - and that wasn't happening with the oven in storage.

On an unrelated matter, the local Culligan service called this afternoon. I'd said something nice about them last year, I think it was, and they wanted to know if I was okay with their using my remark in their advertising. I said 'yes,' of course. First, they're an okay outfit. Second, I don't mind the publicity, myself.

As of this evening, the oven, the washing machine and the dryer are where they belong and plugged in.

This household is another - big - step closer to getting back to our usual routines. Like preparing most of our food in the kitchen.

This has been an interesting experience: and I'm not at all sorry to see it winding down.

My Son, the Techie

My son set up and launched his website yesterday evening. 'First' website, I suspect. It's still a work in process, but what I've seen looks good. Granted, I'm biased.

Today he's tweaking the WordPress-powered blog on the website. I told him that I'd be using him as a technical consultant when/if I start hosting my blogs myself - which I might, although Blogger's served me very well.

And you can't beat the price.

In other developments, the flooring project is in process again this morning - and still going well.

I located the stove - also the washer and dryer. They're in an arc, starting west and a little south of my desk, mostly in the west part of the north room. Happily, it's a big room: although with the movable contents of the kitchen and laundry room in here, it doesn't feel like it so much.
Posted by Brian H. Gill at 10:49 AM 1 comment:

Living in a Construction Site

There are much worse things than having a water pipe burst in the house. But that's been enough to disrupt things for this household.

We've been in the rebuilding stage for a while here. And, since my desk and computer are in the north room, just off the kitchen, I have a sort of front-row seat.

As I wrote in another blog, earlier today:

"It's quiet at the moment, but pretty soon this area will be suffused with the rhythms of a staple gun, the shrill sonority of a rotary saw, anon hammerings and scrapings.

I took some photos on Wednesday, while the floor was mostly taken apart in three (or four, depending on how you count them) rooms: 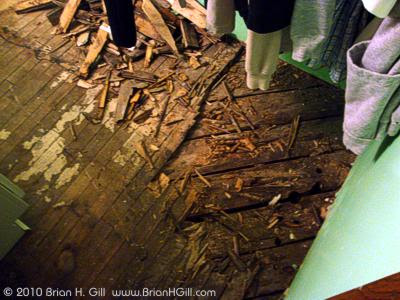 Tearing the floors up uncovered a few things that needed fixing. (October 6, 2010)

I'm not going to say that having an indoor water feature in the house was a good thing - but taking up flooring, and what the flooring was sitting on, showed a few spots that needed attention - and made it possible to get the fixing done. 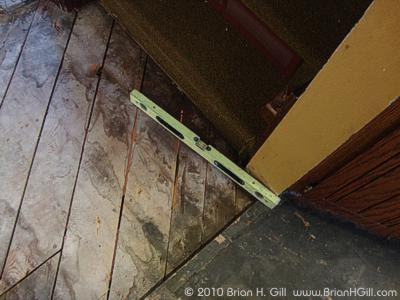 Here's the floor at the foot of the stairs going from the ground to the second floor: or, rather, the floor joists and old subfloor. (October 6, 2010)

If you look closely, the gaps between the old subfloor planks aren't very dark. There's a reason for that. You're looking straight down into the basement, where a light's on. I'm going to miss being able to see into the basement from the first floor. But not much. (October 6, 2010)

There's smooth flooring in the rooms that needed work now, for the first time in - quite a while. There's going to be a finished surface that goes over that - but I'm glad not to be walking on rough planks and the occasional screw or nail any more.

Just to keep things interesting: as of - early today, I think it was - the refrigerator is in the north room, behind me and to my left as I sit at the desk. It's plugged in, so our food supply is okay. The stove? It's somewhere else. And not plugged in.

I'm going to be glad when the various repair/reconstruction jobs are over.

There's quite a lot of work that needs to be done on the east wall of the house - but happily that can wait until spring.

One more thing: My wife and #3 daughter have been off with the Soo Bahk Do class, down in the Twin Cities (Minneapolis-St. Paul to non-Minnesotans). Some sort of test. I expect them back in an hour or so.
Posted by Brian H. Gill at 9:58 PM No comments: