A Quick Trip, a Factory, Candles: and Home at Last!

Yesterday afternoon I drove up to Hillsboro, North Dakota, with my wife, son, and #3 daughter. Then I slept 12 hours, took photos as my son-in-law and #2 daughter did a ribbon-cutting at Spiral Light Candle's factory, and drove back home.

I know that wife, son, and #3 daughter were with me: I haven't checked to see if we forgot anything up in North Dakota. I don't plan to check until tomorrow morning. Right now I'm thoroughly enjoying being back home again.

Don't get me wrong: I enjoyed seeing everybody up in Hillsboro, but I also enjoy being back home.

I didn't get photos of Friday night's thunderstorm and hail. I'm told we had inch-and-a-quarter size hailstones here in Sauk Centre. Father Statz, the parish priest, says that he left his car outside that night - and the next morning it looked like someone had gone over it with a ball peen hammer.

That would explain what I heard around 11:00 p.m. Friday night. Hail usually makes a fairly light "tap" when it hits the roof. This sounded more like someone dropping gravel on the house.

When #1 daughter went out to check on her rabbit, Giol, the next morning, she found that he'd dug a Giol-size trench by his shelter. It was deep enough for him to lie in, with his back flush with the surface of the ground: a sort of fox hole for a rabbit.

I went to Mass yesterday, with #1 daughter, as we often do on weekends. My wife, son, and #3 daughter left for church a few minutes ago, and I'm looking forward to a comparatively relaxed Sunday.
Posted by Brian H. Gill at 10:28 AM No comments:

Email ThisBlogThis!Share to TwitterShare to FacebookShare to Pinterest
Labels: rabbits

My Desk: It Works for Me

Some folks do their writing at an uncluttered desk, with a view of a lawn or garden. This is where I spend most of the day. And quite a few evenings. 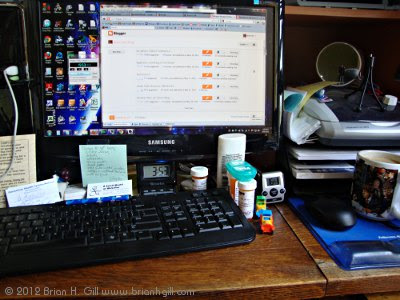 The latest addition is that little gray box by the toy cars. It's a kitchen timer, set to go off every 30 minutes. When it beeps, I get up, stretch, and sometimes walk around a bit. Without that, I'd stay in place for hours.

A garden view would be nice, but there's a window to the right of my desk, looking out on a hummingbird feeder, some lawn, and (almost) the corner of Ash and South 9th in Sauk Centre. My webcam looks out that window, too, and that's another topic.

A Sign, a Mirror, and a Very Useful Reminder

Nobody got hurt, the sign's okay, and damage to the van is somewhere between negligible and none. And I got a very useful reminder about paying attention. 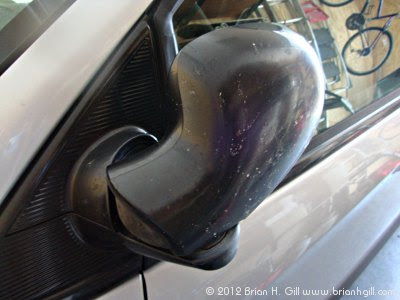 I'd been driving along Sinclair Lewis Avenue, approaching Holy Family School, when I heard a loud TAP!! in the vicinity of my left wrist. That, and the mirror looking at the steering wheel, were the only noticeable effects of my clipping one of Sauk Centre's crosswalk signs. 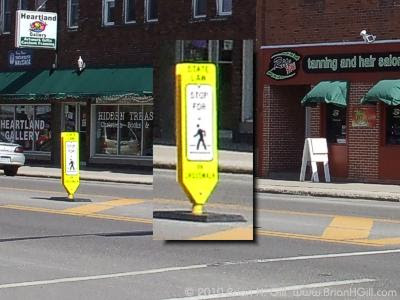 I'd miscalculated where the left side of the van was, by maybe two inches. That sort of thing - at one time - simply didn't happen.

I'd been paying attention to parked vehicles, with particular attention to any signs of someone short and inattentive moving near them. I'd seen the sign, and had intended to drive close to it, making as much room as possible between the right side of the van and parked vehicles. But I hadn't paid attention to the sign. Not in terms of noting just where it was in relation to the van.

That's not good. But now I know that I need to pay (closer) attention to all objects near the van's projected path. And I'll be less self-confident when driving: which, if not carried to extremes, is a good idea. 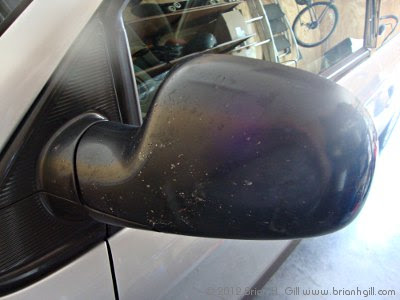 Asking for the Boss

The new garage is getting closer to being done. This afternoon, one of the folks who were working on the floor knocked on the back door. Or, rather, what had been the back door before it became the door from the living room into a sort of back entry/mudroom/whatever.

He told me he was looking for the boss. My wife wasn't home at the time, and wouldn't be for a few hours: and he needed her 'okay' before he'd start sealing the floor. Not mine. Hers.

Several years ago, a technician who'd been called in by my wife wouldn't ask her any questions. The three of us were in the same room, I'd told him that I didn't know anything about the issue at hand - and he'd ask me a question, I'd tell my wife what he'd said, she'd tell me, and I'd tell him. At least this time my wife wasn't there. And I've done enough customer service to know that not everybody's able to hold a detailed message in memory.

The floor is concrete, now acid-washed, and quite ready for sealing. I hope that the rich mottled-brown color looks the way it did this afternoon. That's one attractive floor treatment.

Apart from that, my son's well-settled into his office, we've got wire cages around the garage's fluorescent tubes, and the pass-through from the office to the living room is cut, with doors/hatches in place.

My wife's been very patient, waiting to get her garage/workshop. I'm glad it's almost entirely done.

"... there's nowhere else on earth that I would rather be"