Birthday Watermelon, and an Unexpected Errand

I put photos from my 60th birthday celebration in another blog:
Here's what I wrote:


The Big Six-Oh and a Birthday Watermelon

My family did a good job of seeming to have forgotten my birthday. I nearly lost track of the date, myself. Which would have been awkward, since I had a driver's license renewal coming due this year: and that's another topic. I passed the vision test, by the way, and the photo looks like me: which can't be helped, and that's yet another topic.

My wife and #3 daughter came in at noon, with balloons and presents in tow. That's the nicest surprise I've had in - can't remember. A long time. We've now got the complete Danger Mouse series to watch, thanks to my son's efforts. It's not Shakespeare or Lucas: but I think we'll like it. Danger Mouse, that is.

#3 daughter explained that they couldn't find any balloons with "60" on them, but I think the slogans they found were at least as appropriate. Those balloons have 'attitude,' of which this family has at least its share. 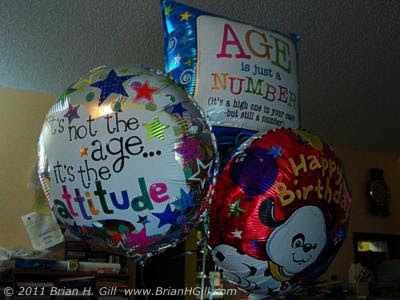 "It's not the age ... it's the attitude."
"Age is just a number. (A high one in your case - but just a number.)"
That evening they brought out the birthday watermelon. I'd wonder if they'd find a cake analog: being diabetic isn't as big a problem as it could be, but there are foods I definitely shouldn't eat. Not in any significant quantity, anyway. 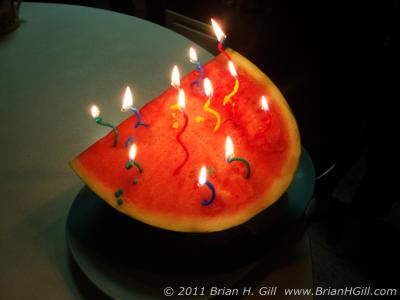 Birthday Candles: on my birthday - - - watermelon.
Those curly candles? Nobody said "screwball," but I suspect that may have been an inspiration for the shape.

As my father used to say: "And a good time was had by all."

Time, Schedules, and Getting a Grip

Earlier this month, I finally changed my blogging schedule. Partly to free up time for projects that have been on the back burner for years. Make that decades, in some cases; partly because even in my 20s, there was only so much I could pack into each 24 hours. And I've been 20 three times now. More about that in yet another blog:

Once a Dad, Always a Dad

#1 daughter was here over the weekend, with her cat. Twitches, the cat, was almost frantically fascinated by my wife putting plastic sheeting up on the window by my desk. She was outside, the cat was inside, trying to track every movement.

I got a call that evening, while my wife and #3 daughter were at Soo Bahk Do. It was #1 daughter. She'd gotten back to Alexandria just fine, been sitting down, stood up, passed out, and had taken book shelving with her on the way down.

Later, after talking with my wife, she called the emergency ward of Douglas County Hospital. They said she should come in to get checked out. We weren't going to have her driving under existing circumstances, so I drove the van up to Alex and took her in.

We arrived at the emergency ward at about 10:00 p.m., and we had a nice long chat about "random" topics, as she put it. An old-fashioned exam, and up-to-date lab work, showed the probable cause of her passing out: which had an easy fix.

I took #1 daughter back to her place, drove back to Sauk Centre, and got to bed well before dawn.

For some reason, though, I'm feeling a little tired today.
Posted by Brian H. Gill at 12:44 PM 2 comments: