A Quiet Evening, Aside From a Tornado Watch

This is going to be a much less routine night than I expected. There's a tornado watch out for this area.

You can see why: 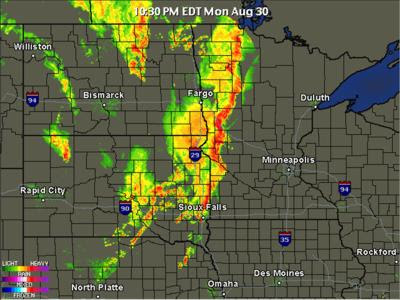 (From Wunderground.com, Minnesota, used w/o permission)

I'm not surprised. It's been hot, humid, and windy all day - 'thunderstorm weather.'

Here's about as much as I know about the watch, so far:

I'll be keeping an eye on this set of storms, obviously. At the rate they're going, I figure it'll be a half-hour, maybe an hour, before the excitement starts here.

If I seem overly-calm about this: I'm pretty confident in the storm-spotters who get deployed outside town in this sort of situation, the warning sirens have been inspected and serviced recently, and - like I said - I'll be staying up to keep an eye and ear out.

There's a view of a Sauk Centre neighborhood on this webcam: Small Town America: Minnesota .
Posted by Brian H. Gill at 9:50 PM No comments:

So, after supper, #2 daughter, my son-in-law, and their dog come in. They were "in the neighborhood," in Pelican Rapids, and decided to drop in. That's very roughly 75 miles from here - which, by North Dakota standards, is sort of "in the neighborhood."

They've been to Hawaii - a long-overdue honeymoon, in my opinion - and had tales to tell and pictures to show.

Not Much Done, and All Day Doing It

#1 daughter and a friend of hers came visiting a little before noon today: an expected event. We talked, I grilled burgers while they observed Giol, her pet rabbit, and eventually they went over to see my father-in-law, his clocks & violins.

I went up to the attic, got some reading done and made a few notes before they were back - and we talked some more. Later, after the evening meal, her friend and I talked about Jung; Freud; philology, linguistics and the history of the English language; and Road Runner cartoons - in that order, in the space of about a half-hour.

Which, for me, is about par for the course. Him, too, I understand.

They're off again: and it's time for me to start thinking about getting down to the task of setting up tomorrow morning's posts. Or deciding to give them a miss until Monday.
Posted by Brian H. Gill at 7:19 PM No comments:

Once in a While, I do Something Right

My wife, #3 daughter, and son were in St. Cloud this morning, to see a doctor: a routine follow-up on surgery.

I was a bit distracted when they returned, and didn't ask #3 daughter how she was feeling. This evening, when she was in the kitchen, I remembered - and asked.

Later, my wife told me that #3 daughter had observed 'you know, Dad can be nice sometimes.' Awww. That's the sort of thing that makes this 'parenting' thing feel worthwhile.
Posted by Brian H. Gill at 10:20 PM 8 comments: 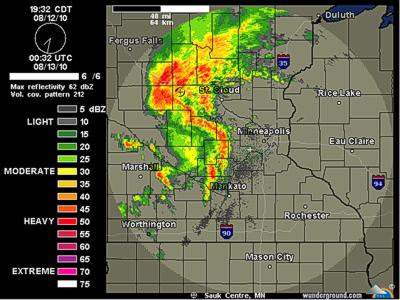 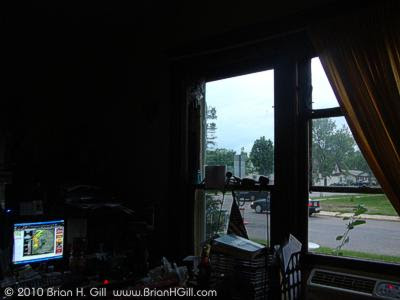 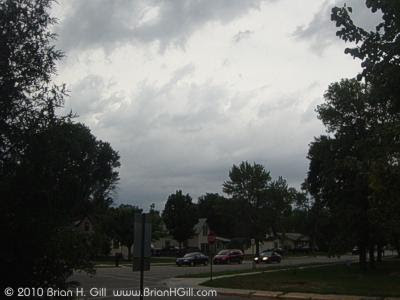 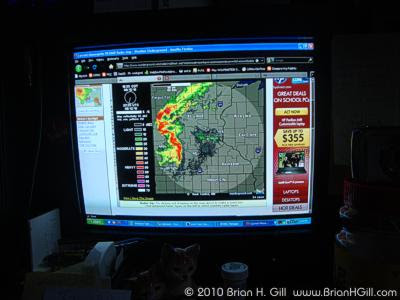 I'm in full agreement with my wife: we have had enough excitement this summer.

There's been good kinds of excitement: like getting the patio in back that she's wanted since we bought the house.

On the other hand, the majority of an old willow in our back yard ended up - on our back yard. That much dead wood won't just go away, so my wife found an outfit, Hoffman Tree Service & Stump Removal, who could cut the willow into bite-sized chunks and haul it away.

Haul most of it away, that it. She saved a sound piece of the willow for her father, L. N. Kaas. He uses willow wood for some violin repairs.

Here's how the tree removal went, on Monday: 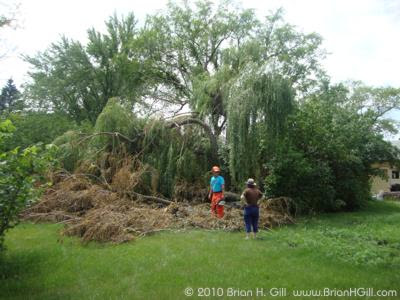 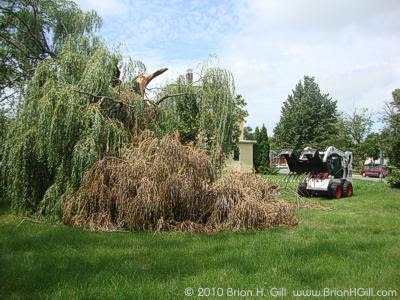 Enter the Bobcat. Those are great things for this sort of job. August 2, 2010. 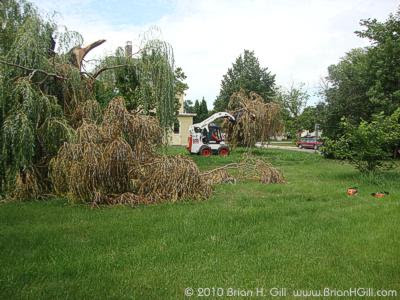 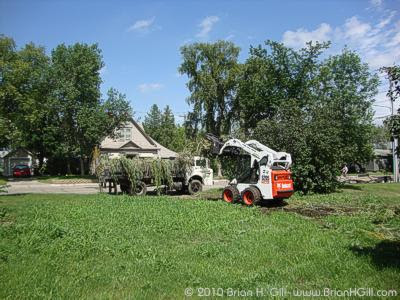 And again. They'd hauled one truckload out and come back for more by now. August 2, 2010. 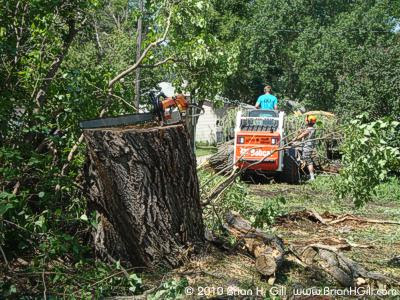 We're hoping the willow will grow back: which is why they left so much of the stump. August 2, 2010. 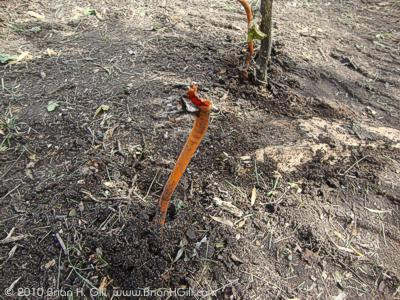 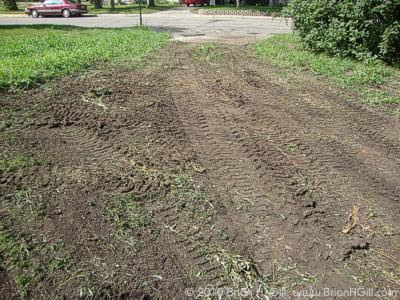 That had been seeded earlier this summer, after work on the patio. Oh, well: we didn't know a storm would knock down most of the willow. August 2, 2010.

It was a hot, humid Monday, and I had work to get done. Right around 3:00 that afternoon, I lost my Internet connection. Hoffman was still in the back yard, getting the last of the old willow removed. There's a connection with what they were doing, but it wasn't obvious at the time.

All I knew was that I couldn't get online, my webcam couldn't get a signal out, and our telephone was dead. Also the television. We get phone, cable and Internet through the same cable, and it didn't take a highly-trained technician to tell that something was wrong with our connection.

I needed to call our service provider: which is quite a trick, with no phone. I hadn't been over to L. N. Kaas's place, my father-in-law, since he started fixing violins: and this was a fine excuse to go over.

I took a picture of a two violins he's got on display in his shop, talked, and went back home. (Photo of the violins is in another blog)

By then, Hoffman and my wife had discovered what had happened. The coaxial cable leading to our house had bee "buried," but nowhere near deep enough.

I'm not faulting them. They didn't know that that cable was hidden, presumably just under the sod, because we didn't know. The guys who put the cable in, earlier this summer, had apparently encountered a root just under the surface: and placed the cable over the obstruction, instead of cutting through it.
I'm told that, legally, they're not obliged to do more than make sure that the homeowner can't see the cable. "Under the sod" is how it was put. I'd have appreciated knowing how it was - but we live and learn.
Posted by Brian H. Gill at 10:47 PM 1 comment: