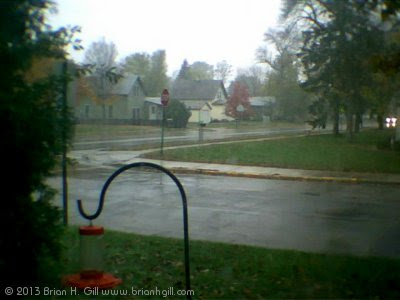 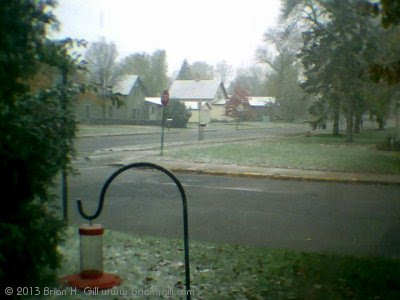 It's very slightly heavier now, compared to a quarter-hour ago: but it's still "light snow." It's also the first snowfall of the season, here in Sauk Centre, anyway.

The pictures are reduced-size frames from the webcam looking our my north window.

Malware: Threat, and Opportunity for Relaxation

A routine sweep of my computer last night found two probably-related instances of malware on my computer. The software that found them asked if I wanted them removed. I gave it the go-ahead, of course.

After re-starting my computer, I had a more robust anti-malware application sweep the computer again.

This gave me much more free time than I expected today: or wanted.

The good news is that the second-to-the-last sweep only uncovered four instances of malware: which weren't there after the last one.

The 'it's not a problem, it's an opportunity' news is that I have five fewer hours to get tomorrow morning's post done.

That's okay. I've got my notes from yesterday: and now I know what I'll be doing for the rest of the day. And, probably, evening.
Posted by Brian H. Gill at 2:09 PM No comments:

Email ThisBlogThis!Share to TwitterShare to FacebookShare to Pinterest
Labels: computers

The Furnace is Fixed: a Day Early

'The furnace guy' had a break in his schedule, we had already received the needed parts, and so he came today: a day early.

Our furnace is now safe to operate, which makes me a happy camper.

A warmer one, too.

The Furnace Broke: But It Could Be Worse

My cold, or whatever has been ailing me, isn't doing well at all: but I'm feeling much better. I suppose someone could work up an ethical concern over massive casualties in the rhinovirus population, but I won't bother.

Oddly enough, I can't remember any protests as smallpox was heartlessly driven to extinction: and that's another topic.

I've been getting some work done, more of which won't happen if I keep writing this post.

We've had someone look at the furnace/heating system. Good news: the situation showed up in our yearly maintenance check of machinery that keeps the house warm during winter. Not-so-good news: there isn't just one malfunction. A whole mess of parts either aren't working, or aren't working properly. Sort-of-good news: we found out before the serious heating season started; and the parts can be replaced. More precisely, the parts can be replaced: once they arrive. There's a fair-sized order being, I hope, processed correctly.

Meanwhile, our main heating system is offline, and the household is setting up space heaters to keep conditions inside somewhat comfortable.

One of the benefits of higher energy costs, compared to what householders paid in my youth, is that it's been decades since the start of heating season was punctuated by news reports of exploding houses. In some sorts of stories, it would have been a funny situation. The reality wasn't amusing. Folks whose furnaces failed catastrophically didn't always survive.

Considering some of the alternatives, spending money on this year's repairs doesn't seem like such a bad thing, after all.

Fogbound Streets of my Mind

It's a grim, gray, gloomy day. Drizzling rain from a faceless sky sizzles on sodden streets as school busses slink past.

Inside, time passes. I sit at my desk, chasing fleeting thoughts through the fogbound streets of my mind.

Their footsteps patter away in the mist.

And I still have a cold.