On Saturday, April 27, I was at a Knights of Columbus fundraiser near the entrance of Coborn's. We were collecting money for Special Olympics, Camphill Village, and similar outfits.

At one point, a boy came by with his (mother?). He looked at me across the table, smiling mischievously, pointed at me and said "you look like Santa." That was a day-brightener.

#2 daughter and Son-in-Law stopped by a little before 10:00 p.m., on their way to the Twin Cities. He showed me a document he wanted proofed and revised as necessary: which I had done a bit before midnight.

Reading, proofing, editing, and revising several hundred words isn't the sort of thing that lulls me to sleep, so I wasn't exactly listless at the end of the process.

Dishes were waiting, anyway, so I had something constructive to do while unwinding.

Now, though, I really should get to sleep.
Posted by Brian H. Gill at 1:02 AM No comments:

I'm very glad to be home.

Spiral Light Candle needed my signature - made in person - on Wednesday, so I drove up to Hillsboro, North Dakota, Tuesday afternoon. The drive went well, I had a good time getting together with #2 daughter and son-in-law; and spent Wednesday, Thursday, plus part of Friday, doing a little database updating. I'm not done, and plan to continue as soon as I get back on speaking terms with three digits of my left hand.

The drive back was an anticlimax. Road reports promised packed and blowing snow plus slippery spots on I94 from exit 119 to Sauk Centre. Instead, all I got was perfectly clear road and blue sky. Oh, well: it's safer that way.

Next week I hope to go back to a chiropractor and get several joints and nerves sorted out. I've been through this sort of thing before, and recognize that recovery is a process that's not necessarily swift. There's also an eye exam, which will address another issue: and that's another topic.

The bad news is that my left fingers and thumb are still giving me fits at intervals. The good news is that so far I've been able to manage the situation by paying very close attention to my posture, and taking painkillers before I sleep. I don't like using painkillers, or other pharmaceuticals: but I'm not stupid, either. Sometimes using available technology is better than the alternatives.

Speaking of technology, yesterday I had my son help me swap out my computer's keyboard for an 'ergonomic' one my father had. My son had pointed out that he had the old keyboard in storage: as part of his repair shop's stock.

The new-to-me keyboard is one of those 'bent' ones where a standard QWERTY board is split into two angled parts. I've used it before, but not often.

I learned to type on old manual typewriters, and need to slow down a little when the keys aren't quit in the expected places. On the other hand, my fingers are getting used to the new positions: and this learning process is a lot easier than developing a system for typing with my right hand only.

I'd been considered one-hand typing last week. It's very frustrating when I get only a handful of sentences out before having to de-stress my left hand and arm.

Aside from that, it's a beautiful day: bright sun and several degrees above freezing.

Living in 'The Future:' and Loving It

I was born in the Truman administration, and grew up reading about 'the future.'

It's not quite what we expected. Weather control research stopped after a 1972 experiment went horribly wrong. LEDs are pretty close to Hugo Gernsback's cold light, but only a few folks have taken vacations in space.

And some things caught nearly everyone by surprise: 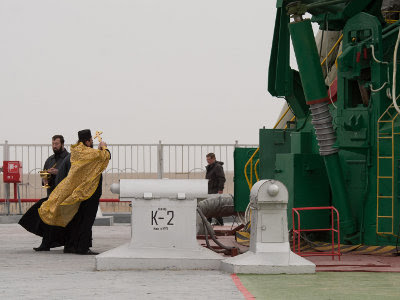 (from NASA/Carla Cioffi, used w/o permission)
"An Orthodox priest blesses the Soyuz rocket at the Baikonur Cosmodrome launch pad on March 27, 2013 in Kazakhstan. Launch of the Soyuz rocket is scheduled for March 29 and will send Expedition 35 Soyuz Commander Pavel Vinogradov, and Flight Engineers Chris Cassidy of NASA and Alexander Misurkin of Russia on a five and a half-month mission aboard the International Space Station. Photo Credit: NASA/Carla Cioffi" (March 27, 2013)

Although 'the future' isn't quite 'as advertised,' I like living here. 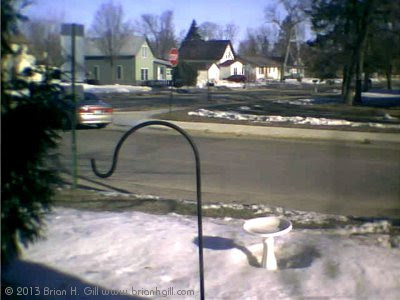 Tuesday morning: There's still about a foot of snow around the bird bath, and I probably won't have the hummingbird feeder out for another month. The snowman in our neighbor's yard, across the street, has melted down to a small pile, and their yard has turned a hopeful shade of brownish tan with a vague suggestion of green.

It's springtime in Minnesota.

The fingers of my left hand don't complain overly much when I type: as long as I sit very straight, and don't use them for very long. It's been over a week since that's been an issue. Adjusting my posture is helping, along with exercises involving my shoulder blades.

The issue isn't going away entirely, however, and I may have to see a chiropractor about sorting out some of my joints. I've already had surgical modifications made, to deal with carpal tunnel issues.

I'm not complaining, though. As we say here in Minnesota, 'it could be worse.'