My wife and #3 daughter brought some kimchi home with them from Soo Bahk Do class tonight. My daughter was - impressed? - that I took a look at it, and ate the entire sample: maybe two or three tablespoons-worth.

My eyes started watering about the same time that she was explaining that she'd just touched some to her tongue.

I think my method allows me to experience it more completely.

Email ThisBlogThis!Share to TwitterShare to FacebookShare to Pinterest
Labels: food, Soo Bahk Do

Busted Water Pipe, Day Nine: Getting Back to Normal

Possibly the last of the Servicemaster fellows was here yesterday, cleaning and - sanitizing, I suppose you'd call it - the ductwork that got water in it. I took a few photos, but that'll wait until another day.

The duct cleaning is important, I think: dust builds up in those things, and water got into over a dozen feet of them a week ago yesterday. One of the last things I'd want is mold getting a foothold there and spreading spores through the house. Not healthy.

Good news: the ducts were more airtight than the technician expected them to be.

There are going to be 'next steps' well into next year - but at this point the house is dry, and ready to get flooring replaced.

#1 daughter arrived Friday afternoon, and is here for the weekend - and glad that the fans are out of here. This place was noisy for a while.

The ladies have been sorting through stuff that was taken up from storage and has been getting dried. We'll be discarding some, passing some along to #2 daughter and her husband - and keeping some.

I can't work up much enthusiasm for the idea, yet, but it's probably a good thing that a pipe broke in the laundry room last Friday morning. One of the fellows who's been over here, sorting out what needs to be done now that Servicemaster has dried the structure out, noticed that he got sparks around the circuit breaker panel.

That is not a good thing.

When an electrician came to evaluate the sparks, he found that one wire wasn't quite insulated properly. It's hard to tell what happened: years of slight movements might have cracked the insulation, it might have been nicked when the system was installed - or maybe something else.

Good news: It wasn't the water, so we aren't looking at tearing apart the walls and floors and tracing the wires. And, the faulty wire has been replaced.

Like I said, I don't feel all warm and wonderful about that busted pipe and the water damage. But between discovering a dryer vent that could have caught fire, learning about a small-but-dangerous flaw in the wiring, and getting a look at some repairs in the outside walls that can - thank God - wait until next summer: It looks like it's a good thing we had our attention focused on the workings of this house.

Oh, right. One more thing. We discovered that the insulation over our living room needs replacing and that the airspace over the room isn't adequately ventilated. That area wasn't affected by the flooding: but my wife had one of the fellows who was over here looking at needed repairs take a look at that area too.

I'm not surprised about the insulation situation. That area's one that we figured needed attention - but could wait. Now, it's getting attention.

One last thing: Servicemaster took its fans and heavy-duty dehumidifiers out of the house yesterday afternoon. It's really quite, now that they're gone.

Busted Water Pipe, Day Five: Bathroom's in the Kitchen, and a Mouse Condominium?!

This could have been a lot worse. It still looks like we won't have to replace the drywall. Most of it, anyway. There's part of the laundry room that may need work done on the walls. 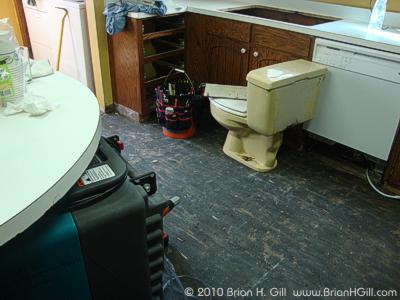 You know it's going to be one of those days, when you come downstairs and find part of the bathroom in the kitchen. September 21, 2010.

Floors in the ground floor bathroom, kitchen, and front entry, on the other hand: Those are stripped down to the old country-farmhouse floorboards. We'd use that as the 'new' floor surface: but there was too much damage done over the generations, before we got this place. So, after some repairs and yet more drying out, we'll be getting those floors resurfaced. 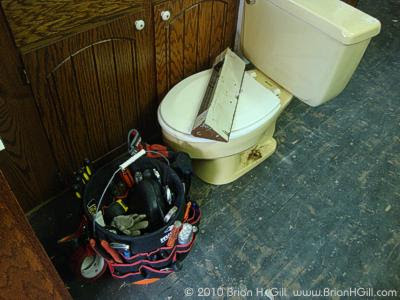 The Servicemaster crew has done this before: That's an impressive tool kit. September 21, 2010.

The fans and dehumidifiers are on again. They were off while the Servicemaster crew was here: good thing, too, since they kick up quite a breeze. I was right, by the way: the house did seem awfully quiet. Apart from the hammering, drilling, and tearing up of flooring, of course. 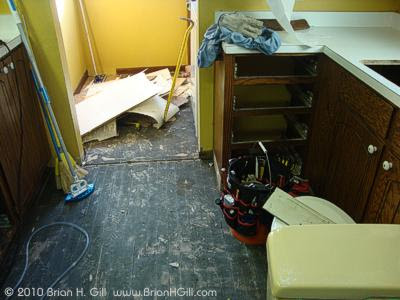 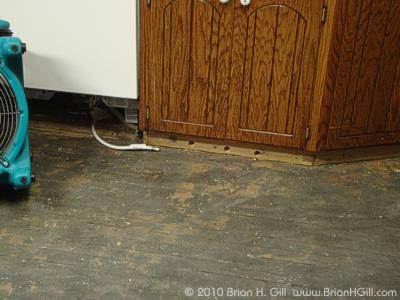 My wife saw those holes in the cabinet base and said to the fellow, in a pleased tone: "You're making mouse condominiums!" September 21, 2010.

If those holes do their job of ventilation, we may be able to keep the existing cabinets. Which is to be hoped for: the things are nailed to the walls, not screwed in place.

As for 'mouse condominiums,' the first thing I thought of when I saw those holes was something like 'pre-drilled mouse access?' It would make a good story, maybe.

A crew - two men - from Servicemaster came today. I understand that they usually have more people on a job like this, but St. Cloud Servicemaster's territory extends up to the Canadian border - and apparently there's a rather major job that needs attention in a hospital up in International Falls. It's probably connected with this news item:

"A major waterline break Sunday evening at the hospital campus of the Rainy Lake Medical Center has caused the hospital to divert its inpatients to other facilities, according to CEO Brian Long.

"Long reported this morning that the water line break that occurred at 7 p.m. Sunday caused the concrete floor in the basement to lift and the lower level to flood with about 7 inches of water...."

Under the circumstances, I'm glad that Servicemaster, St. Cloud, sent anybody to a residence in Sauk Centre, Minnesota.

The crew did a good job, too, stripping floor coverings from the ground-floor rooms. They also made quite a lot of noise, between hammers and other tools.

We got some tentatively-good news. We may not need to replace the drywall.

Once again, I'm really glad I was up at a crazy-late hour Friday morning, and (eventually) noticed the running water. This could have been a lot worse.

Actually, it may be just as well that we had to pull the washer and dryer out and inspect all the hoses and ducts. There was quite a lot of lint in the dryer's vent. Note to self: inspect that system more often. Lint makes good kindling - and that's not something you want near something hot, like parts of a dryer.

Bear in mind: After Friday and the weekend, I'm just a bit jumpy.

This house is going to seem very quiet, once those fans and dehumidifiers are out of here.

I spend about two hours this afternoon, cutting foam plastic squares in half, taking the records (vinyl albums) out of their jackets and inserting a half-square of the plastic, to keep the two sides apart.

I wasn't able to get the job done with all of them: but did process the lot that had been put in the garage, instead of being set up in the basement where Servicemaster's fans and dehumidifier are. The jackets were not damp: They were wet. I rather hope that I got to them in time - and that we can hang on to the drying system long enough to keep the collection from molding.

Other than that, it's been a fairly normal day: high-volume fans and a humidifier pumping water out of the air - and so, indirectly, out of the walls and floor on the first floor and basement; grilling burgers - actually, #1 daughter did that today (thanks!). I was talking with a fellow from Servicemaster when it was time to fix lunch.

I'm not complaining: but those fans are rather loud. I like the sound, actually: but it makes a certain amount of concentration necessary when I want to talk with someone.

Not So Much Water on the Floors

Servicemaster (St. Cloud) got a crew out here long before sunrise. They got things carried to the garage and set up fans and dehumidifiers - big ones - that are pulling what water they couldn't get out of the air, and so indirectly out of the wood and dry wall.

The company will have someone else come - in a day or two, as I recall - to see whether we get to put new dry wall into the laundry room. I could do without that, but I could also do without mold and other problems that can come from neglecting maintenance.

My wife relieved me at about 7:30, I got maybe four hours sleep, and I'll shortly be heading for St. Cloud for some testing.

After that, I don't think I'll have trouble sleeping tonight.

I could have realized that the washer wasn't running normally, when I didn't hear the water in the laundry room turn off after a few minutes. But I was intent on finishing a post in another blog.

Good news: My wife can - and did - crawl in to the main water valve for the house and there isn't any more coming in; Hoffman Plumbing (Sauk Centre) is here now, and found what was wrong (a rubber hose we'll know to replace at intervals - now); Service Master, St. Cloud, will be out here - when they're able to get a crew together.

Bad news: I don't know how much damage's been done yet. And we're a dry house until further notice.